When you're considering your options for liveaboard scuba diving in the Caribbean, the Bahamas and her Out Islands offer a distinct blend of international glamour and tropical ease.

The islands and cays sprawl across nearly 100,000 square miles of ocean, beginning at the northern point east of Palm Beach, Florida and spanning practically 750 miles to the southeast where they come inside 50 miles of Cuba and Haiti.

The West End area is rarely visited by guests and is home to many creatures – both large (sharks and dolphins) and small (grouper, snapper, assorted other reef fish). At least one afternoon during the trip will be dedicated to a dive at the area known as "Tiger Beach".  Both Caribbean Reef sharks, Lemon Sharks and Tiger sharks are known to frequent the area. 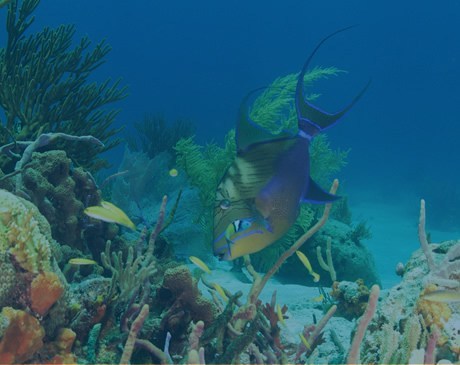 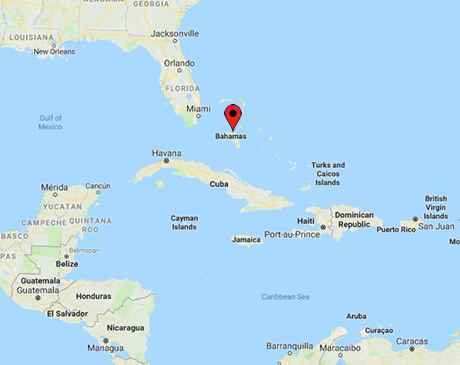 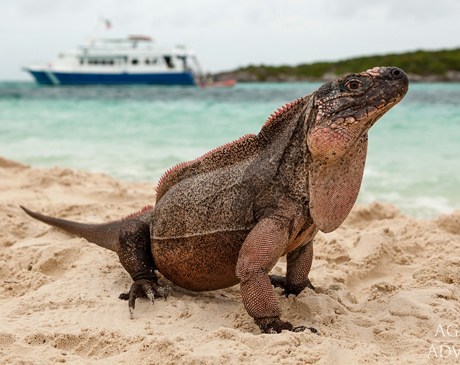 There are multiple dives throughout the day and a night dive each evening for an average of up to 27 dives on 7 night charters and 42 on 10 night charters.    All dives are from the yacht.

The Exumas consist of an array of more than 350 small islands and cays streaming down from just 35 miles south of new Providence to the anchor islands of Great and Little Exuma to the south. The Exumas are a 120-mile-long island chain-within-the-chain of the Out Islands. The Cays are the most exotic of the Out Islands, a collection of tiny jewels set in the aquamarine and sapphire of the most beautiful water you’ve ever imagined with an intriguing combination of walls and rich shallow reefs.

Lost Blue Hole: The rim of this large blue hole lies in 40' of water surrounded by coral heads, stingrays and many schools of fish. There is a lobster filled crevice at 80'. In the sand surrounding the hole, divers will find many small fish such as Banded jawfish, Seminole gobies and Tobacco fish. There are usually 1 or 2 nurse sharks here and during the spring a large school of Blacknose sharks inhabits the bottom of the 200' hole. This is the location of the Bahamas first lionfish sighting.

Periwinkle Reef: This is a shallow patch reef that is teaming with fish. The local Nassau operators feed fish here, so sergeant majors and angelfish will approach scuba divers looking for a handout.

Amberjack Reef: A 50' patch reef that has prolific fish life. You will see reef sharks and up to 10 large grouper. This dive also has many interesting small critters such as pirate blennies and garden eels. During the safety stop divers will be surrounded by a school of 100+ horse-eye jack that hang out under the yacht.

Austin Smith Wreck: A 90' Bahamian Defense Force Cutter lying in 60’ of water that sank in 1995 while being towed to San Salvador to be sunk there as a dive site.

Barracuda Shoals: This bankside patch reef has huge schools of fish as well as many small critters on the reef and surrounding sand.

Cathedral: This site is part of the Dog Rocks Reef. This reef starts at 35' and slopes off to 50' before dropping straight down into the Exuma Sound. The Cathedral is a large swim-thru where the light filters down from above reflecting off the thousands of silversides that occupy the swim-thru. This swim-thru has many grouper and jacks that come to feed on the silversides. The wall has large stands of black coral and orange elephant ear and tube sponges. Pelagics, eagle rays and sharks are frequently seen off the wall.

Cracked Coral Head: This massive coral head rises 40' off the bottom. Several large swim-thrus make it look like it is cracked.

Jeep Reef: This site named from a coral encrusted jeep that sits near the mooring is in the middle of the Exumas Land & Sea Park and hosts a healthy population of fish. It is also one of the prettiest reefs you will ever see. Current that sweeps through this cut keeps the reef 's corals very healthy.

Pillar Wall: One of many excellent wall dives. It starts at 30' and slopes to 50' before dropping 5,000' to the bottom. There are many caves and crevices. There is a large colony of Yellowhead jawfish in the rubble inside the reef.

Cave Rock: A large coral mound in 50' of water surrounded by several smaller coral heads. There are several caves where you can swim from one side to the other. The large variety of corals and fish will amaze you. Hammerhead Sharks have been frequently seen here.

Monolith: Large mounds of coral rise out of the sand at the edge of the wall. They start at 100' and rise to 55'. There is a colony of Garden Eels in the sand next to the mounds.

Empress Pinnacles: This wall dive features 30' high pinnacles coming out of the sand at the edge of the wall. Peligics are seen frequently in the clear water off the wall. There are large stands of black coral on the sides of the pinnacles.

Mount Olympus: The top of the reef is 45-50 feet, down one side you reach the sand around 95 feet, down the other side it just keep going creating a wonderful wall. Guests could spend all day diving this area and never cover all of Mount Olympus.

Mini Wall: This dive site has two mounds running side by side with a small patch of white sand between these mounds covered with marine life. The first of the coral mounds starts around 35 feet and slopes down to around 70 feet. The second mound starts around 40 feet and slopes to about 85 feet. Both mounds as they slope give the look of a small wall.

Hog Fish: A shallow dive ranging from 30-45 feet. As you swim along Hogfish Reef you will notice lots of crevices and ledges to look under for small creatures. A garden of soft corals with hard corals covers the top and schools of Grunts, Snappers, Chromis and Angelfish cover the reef. Swimming in the sandy areas just off the reef are large and small Hogfish.

Shark Paradise: This beautiful reef received its name from the different types of sharks you can find here at any given time. While enjoying the marine life covering Shark Paradise we have seen, Nurse, Caribbean and Lemon Sharks. Once in a while we even get a beautiful Tiger Shark in the area.

Fishtail: Is located just to the south of Shark Paradise. Due to its location we sometimes get a chance to see a shark while diving the beautiful reef which is covered with Gorgonians, Yellow Sea Whips, Sea Plumes, Orange Spiny Sea Rods and Sea Fans. When you can add a mix of hard corals and a variety of lots of tropical fish you have the perfect spot to enjoy.

Sugar Wreck: This is one of the crew members favorite shallow sites. During the late 1800's a barge carrying molasses sank in 18-20 feet of water in the middle of nowhere on the Little Bahama Bank. Soon fish and other marine life found this to be a great hiding place and soon the wreck was covered with marine life. At any given time we can find the resident Green Moray Eel, or Nurse Shark and everyone's favorite, the Hawksbill Turtle that comes up close for pictures and video.

El Dorado: Starting in 40 feet and sloping towards a sandy bottom around 70 feet, guests will enjoy seeing Lobsters, huge Channel Clinging Crabs, Banded Coral Shrimp and schools of fish. At night Octopus, Squid, Turtles resting, Eels swimming out in the open and an array of hard and soft Corals are seen.

El Captainan: A huge underwater mound that is covered with Gorgonians and hard corals. Just off to the side are two large pinnacles. The top of the main mound starts around 45-50 feet and the bottom 90 feet. You can easily follow schools of fish or stay in one small area and look for lots of macro and small animal life.

Tiger Beach: A beautiful beach area that sits in 15 feet of water. There’s a white sandy bottom that seems to always have Sharks. Most of the Sharks seen are Lemon Sharks ranging from 4-7 feet in length. Also seen are Caribbean Reef Sharks, Nurse Sharks and Tiger Sharks.

Hesperes: A shallow wreck covered with schools of Jacks, Snappers, lots of Angelfish, Eels, Groupers, sometimes Cobia, Nurse Sharks and Turtles. Also known as the Stingray Wreck because of the number of Stingrays you can see in the sandy areas around the wreck.

The Strip: A long strip of coral reef siting in about 45 feet of water. Schooling Fish, Crabs, Eels and at night usually several Green or Hawksbill Turtles.

Moray Alley: A large patch reef where you can easily find Crabs, Lobsters, a variety of Marine Life including lots of Eels, mostly Spotted or Goldentail Eels.

Tuna Alley: A fantastic wall dive where we normally see larger marine life such as Mackerel, African Pompano and some Tuna.

Turtle Rocks: Shallow Reefs with Colorful Coral Heads. Here we can easily see lots of Groupers, Angelfish, Eels, Wrasses and even a Turtle or two in the later afternoon.

Sapona: The Sapona is a Wreck sitting off the coast South Bimini. A lot of the structure sits above the water and the underwater parts are covered with Marine Life. Easily see Gobies, Chubs, Grunts, Groupers, Chromis, Angelfish, Mackerel, Turtles and at night Squid and Octopus.

Bull Run: Three Very Large High Profile Colorful Coral Heads that are located to where there’s a large sandy patch in the center almost like an arena. When swimming around the coral heads lots of Marine Life both large and small can be seen and photographed. We had Sharks mostly the Caribbean Reef Shark swam around us coming very close. When we do get a Bull Shark in the area for some reason the Reef Sharks don’t hang around as much. With the Colorful Coral Heads all the Marine Life and Sharks around it’s easy to spend the day at this one site.

Krispy Kreme: This wall dive earned its name the easy way it’s just a Beautiful Wall Dive full of Marine Life. When divers first started coming to this site, after the dive most would say, ‘that was Sweet” and Krispy Kreme was born.