With awesome visibility and breath-taking soft corals, the Red Sea is one of the most popular scuba diving destinations in the world.

There are over one thousand species of fish in the Red Sea, 20 percent of which can be found nowhere else in the world. It is hard to believe that where the Egyptian desert sands end, a marine paradise begins. Ironically, Egypt's desert climate has created an ideal liveaboard scuba diving setting.

It is one of the sunniest places on the planet, therefore, corals and their tiny guests thrive on an overabundance of solar energy. The Red Sea is the resting place of many intriguing wrecks included several WWII ships that house countless artifacts. 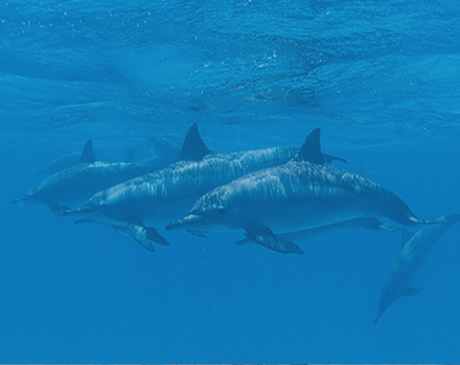 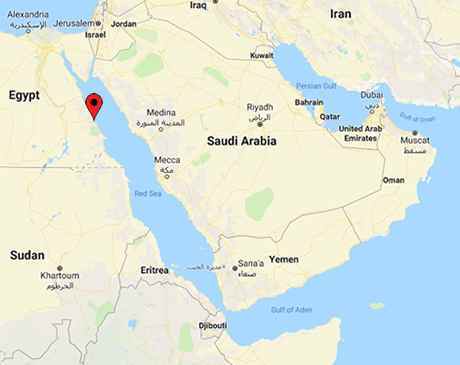 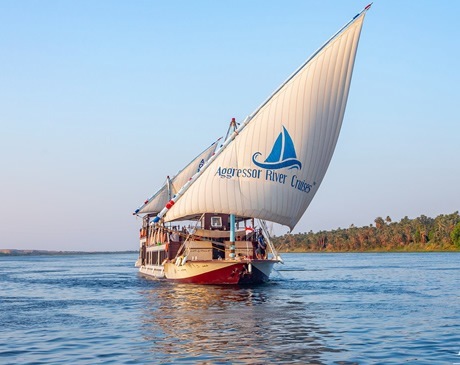 The RED SEA AGGRESSOR III will operate from the Port Ghalib yacht marina and resort area. It is a beautiful gated upscale resort community that is home to the 130 ft., 22 passenger yacht and includes lots of restaurants and shopping. All charters run Saturday to Saturday. Diving begins on Sunday with up to 4 dives a day and night dives when available. 7 night charters average 20 to 23 dives.

BIG BROTHER: The Brothers (Big Brother and Little Brother, or in Arabic, 'El Akhawein') are two small islands in The Red Sea. They are situated 67 km out to sea from Al Qusayr. Above water, Big Brother features a lighthouse which was built by the British in 1883 and is manned by the Egyptian military. Underwater, there are two wrecks: Numidia and Aida. The walls of Big Brother plunge down into the blue at an almost-vertical angle. Shallow swim-throughs are concealed in the wall on the west side of the site making them fun to discover. Hard and soft corals, including some Gorgonian Fans cover the reef and the ubiquitous Anthias are found in the thousands. Fish of all sizes and species live here, including large pelagic life such as Hawksbill Turtles, Grey Reef Sharks, Thresher Sharks, Longimanus (from October/November), and occasionally, Hammerhead Sharks.

LITTLE BROTHER: Little Brother is, as the name suggests, the smaller of the two islands and is located 1 km to the south of Big Brother. Much like Big Brother, the currents can be strong or not present at all and they often change at a moment's notice, adding to the adventure and excitement. Deep walls surround the island with a glorious plateau in the north. Here, it feels like diving in an aquarium with a huge variety of marine life including the larger Hawksbill Turtles, Grey Reef Sharks, Thresher Sharks, and Hammerhead Sharks. The 'Gorgonian Forest' lies in the south east of the site. Longnose Hawkfish perch on the large Gorgonians, however, their shy temperament means they can be a challenge to photograph!

DAEDALUS: This large reef, also referred to as Abu El Kizan, is found 80 km offshore from Marsa Alam. A lighthouse which was built in 1861 by the British stands tall on the small artificial island in the centre of the reef. Today it is manned by the Egyptian military. Currents tend to be much more predictable here, and divers have an excellent opportunity to spot large pelagic life such as schooling Hammerhead Sharks, Thresher Sharks which are commonly seen in the north. Manta Rays can be found anywhere (from March - October), and Grey Reef Sharks and Whitetip Reef Sharks patrol the reef walls. Whale Sharks occasionally pass by in the summer months. Broccoli Corals in a range of candy colours grow out from the reef on all sides. There are pristine hard coral formations in the north and east especially, while overhangs are home to schools of Glass Sweepers. The south plateau is covered in yellow Litophyton Arboreum and Pulsing Xenia. The west has two spectacular sights... 'Anemone City' is a section of the reef wall which is covered in Magnificent Anemone. Further down to the south west is another section of the wall which is covered in Elephant Ear Coral. In terms of topography, the very north of the reef is concave. Many different fish such as Wrasse, Parrot Fish, Rabbit Fish, and Unicorn Fish congregate on top of the reef in the clear, shallow water.

ELPHINSTONE: Elphinstone is a very famous, cigar-shaped reef which sits 6 km out to sea from Marsa Alam. There is a long plateau in the north and south of Elphinstone with the rest of the reef being a steep, colourful wall rich in hard and soft corals. Currents are variable, and can be strong or not present at all. While shark sightings are not guaranteed, the Longimanus cruises in the shallows in the season, and every so often divers encounter Hammerhead Sharks, Grey Reef Sharks, Silky Sharks, and Manta Rays. Barracuda hang in the blue, and Cornet Fish use divers for cover while they hunt the Anthias.

MARSA SHOANA:  (Local - Marsa Alam) Marsa Shoana is an awesome local dive site in Marsa Alam, and normally our first port of call on our itineraries. A white sandy bottom meets a gentle, sloping reef with coral heads small, medium and large dotted about. Divers will come across lots of different ecosystems here which, in turn, promise a wide variety of marine life both big and small. Green Turtles, various Rays and even Dolphins and Dugongs surprise those enjoying the underwater realm.

SHA'AB MAKSOUR: (Sataya) Sha'ab Maksour is a large reef with a wide plateau in the north and south and a wall on either side. There is plenty to see here including schools of Snapper, Dogtooth Tuna, Hawksbill Turtles and some of the healthiest hard corals your eyes have seen! These corals cover this reef with mounds of Porites, Dome, and Mountain Corals nestled in the shallower parts as well as untouched Table Corals jutting out perpendicularly. Some exciting macro life including the Nembrotha Megalocera has also been sighted here.

SHA'AB CLAUDE: (Sataya) Sha'ab Claude is a spectacular dive site with its swim-throughs, short tunnels, and cave-like chambers. At less than 49ft / 15m in depth, this may not be a deep dive site, but its beauty will astound you. Light scatters on the rubbly floor from cracks in the reef overhead. Cave Sweepers hide in the darkness catching the light of divers' torches.

MALAHI: (Sataya) Malahi in Arabic means 'fun' and this dive site epitomises that! Great pinnacles reminiscent of ancient Greek columns tower over divers creating corridors lined with hard coral and rock that wind this way and that. Akin to an underwater maize, these corridors and swim-throughs have multiple branches that lead to the heart of the site. Schools of Snapper and Goat Fish can be found inside, as well as Wart Slugs and Nudibranchs.

ST JOHN'S CAVES: (St John's) The famous St John's Caves are a photographer and videographers' paradise. Sunlight streams through cracks in the reef of the passageways above and falls as dappled sunlight on the rubbly and sandy floor. Here, Bluespotted Rays glide past and Porcupine Fish retreat into the shadows. The many passageways are adorned with feathery Hydroids that glow red, orange and yellow as they catch the light. George, the friendly Napoleon Wrasse commonly approaches divers beneath the boat and checks his reflection out in the domes of their cameras. Enjoy searching for the Juvenile Clown Coris, Bicolour Parrot Fish, Gold-Dotted Flatworms, and at nighttime, Spanish Dancers!

GOTA SORAYA: (St John's) This circular reef is one of the best dive sites in St John's. The soft corals are exquisite, and the walls are patrolled by Grey Reef Sharks and Whitetip Reef Sharks. Wart Slugs and the Pyjama Chromodorid (Nudibranch) thrive on the east side of Gota Soraya, while Black Corals and pinnacles grow out from the reef wall in the west. A large crack in the top of the reef forms an opening which, when underwater, looks much like a grand door that would be found on a cathedral. Known as 'The Cathedral', there is often a juvenile Whitetip Reef Shark resting on the sandy ledge here.

GOTA KEBIR: (St John's) Fabulous soft corals also grow at Gota Kebir with shades of lavender, magenta, icy white, bubblegum pink and peach, making the perfect photo. In the east is the mouth of a large cave guarded at the entrance by a clump of Magnificent Anemone. A tunnel runs in a curve from one side of the cave to the other. Napoleon Wrasse, Barracuda, Trevally, Stone Fish and schools of Ehrenberg's Snapper visit this plateau. A large cave similar to the one in the east, can be found in the west. Scorpion Fish lie camouflaged on the walls and Bluespotted Rays swim about in the warm, shallow water. Grey Reef Sharks, Whitetip Reef Sharks and Hawksbill Turtles frequent this site.

PARADISE: (St John's) Paradise is an idyllic dive site with a pure, white sandy bottom, huge pinnacles, coral heads, and some caves, too! Picasso Fish, Damsel Fish, Lion Fish, and Blanquillo make this site their home. Giant Moray Eels swim freely over the sand in search of a suitable home and every now and again, an Eagle Ray or Whitetip Reef Shark will be spotted. The entrance of the shallow caves are marked by a clump of Magnificent Anemone and the exit opens out into a shallow lagoon full of mounds of green hard corals.

HABILI ALI:  (St John's) Habili Ali is another incredibly popular dive site that can feel like diving in an aquarium! Grey Reef Sharks and Whitetip Reef Sharks swim up and down the reef walls which are densely covered by hard and soft corals. It is not unusual to see Bottlenose Dolphins on the surface here, and sometimes underwater. Manta Rays are around during the summer months. Butterfly Fish, Red Sea Banner Fish, Angel Fish, and Big Eye bimble around in the shallows and for those that have sharp eyes, you will see Large Dragons and Purple Flabellina moving slowly over the walls. Overhangs and Black Corals are found in the south.

ROCKY ISLAND: Rocky Island looks similar to Big Brother from the surface. It is situated on the same latitude as St John's but further east. Underwater, the walls disappear down into the deep blue. Lush soft corals embellish these already pretty walls and Whip Corals grow out in their spiral form. Pods of Bottlenose Dolphins are at times sighted on the surface, and Hawksbill Turtles and Whitetip Reef Sharks underwater. Schools of Fusiliers pass by in the blue. Shallow caves in the reef lead straight through allowing divers to pass and pop out a little further down the wall.

ZABARGARD: Zabargard is located north of Rocky Island. This is actually a mountain with a fringing reef all around. Waters of light, bright, mint green are closest to the sandy shore, fading perfectly into light blue and then darker still to a rich, deep blue. An almost vertical reef wall slopes down to 66ft / 20m, before extending into a long, wide plateau. Both hard and soft corals live here, as do Green and Hawksbill Turtles. There are a lot of swim-throughs and Bluespotted Rays. Vortices of cooperative Barracuda shimmer in the light, Scorpion Fish and Napoleon Wrasse are around, and as the light fades, schools of hundreds of Fusiliers retreat into shallow caves and spaces between mounds of hard coral.